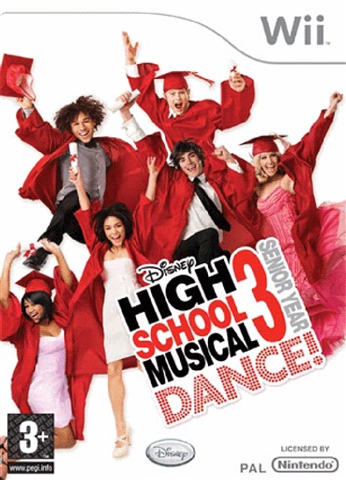 Not just the music and the fun from one High School Musical film.. but from all three in one go. High School Musical 3: Senior Year Dance! (with the exclamation mark no less!) features songs from each of the films. That is 29 songs to keep even the most practised at - and the biggest fan of - the tween sensation happy possibly for weeks as they hone their HSM skills. Gamers get to play either as Gabriella, Sharpay, Ryan, Taylor or Chad.. or even as themselves if they make good use of the customisable character function within the game. In fact, once the game-owning fan has created just the right mix of talent, charisma and perk, it's time to take to the dance mat and really show off the moves. Disney Interactive - the game studio attached to the film maker (lucky!) has ensured that High School Musical 3: Senior Year Dance! Is not just compatible with its own, specially designed, dance mat (although the experience won't be complete without it!). In other words - the game can be used with a wide variety of other such peripherals. All that not enough? Well, once everything has been learned to perfection, it will be time to dance off against friends (or not-so-friends!) before settling down in victory to watch the behind the scenes footage and interviews with the stars of the show! High School musical | Disney Video Games | Movie Games | Movie Game