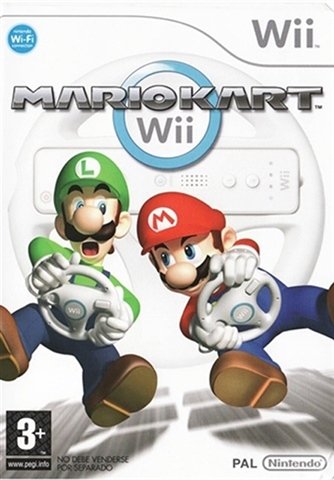 Wheel NOT Included. Mario Kart Wii is an installment of the long-running Mario Kart series, but here for the Nintendo Wii, where you take control of various Nintendo characters to race through different tracks and win the Grand Prix, using a variety of vehicles and items spread through the track to help you. There are various additions to the series. Players can now also play with motorbikes, which can do wheelies but are lighter and can't super boost, in contrast with karts. There's 6 varieties of each for each character class to choose from, and 4 new characters have been added as well as being able to drive with your Mii. Finally, there's 16 new tracks as well as 16 returning from previous games. Gameplay has also been modified. Drifting has been tweaked so that it's easier to use and players only get a turbo boost based on how well they perform the drift. It can be set to Manual, where players press a button to drift, or Automatic, where it's automatically triggered on curves but provides no turbo boost. Stunts can also be performed in the air to gain turbo boosts. Races have also been bolstered to support up to 12 players now. There's 4 modes of play to choose from: Grand Prix, where you race through series of tracks in the 50cc (karts only), 100cc (bikes only) and 150cc (karts and bikes) cups; Time Trial, where you take on ghost replays and try to finish in the least time; Versus, where you race against opponents on a single track; and Battle, where you can compete against your foes in either hitting them with weapons or collecting coins. Multiplayer is also supported, allowing up to 4 players in hotseat and 12 online on Nintendo Wi-Fi, where you can take on strangers and friends (with Friend Codes) in any game mode, play in competitions, beat other's ghost replays or check online rankings. The game can be played using a Wii Wheel (included), Wii Remote, Nunchuck, Classic Controller, or Gamecube Controller. Super Mario Franchise | Racing Game | Mario | Mario bros. | Luigi | Super Mario Kart | Mario Kart Franchise | Nintendo Wii