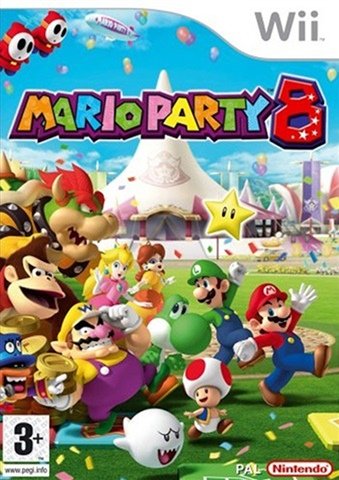 Crazy minigames, board game lunacy and more surprises than you can shake a Wii Remote at are all here in force in Mario Party 8, the first in the series to appear on Wii. Every character you could expect to see in the game is here - Yoshi, Peach, Mario and the rest - along with new faces Blooper and Hammer Bro, who previously appeared for the first time in the original Super Mario Bros. on the NES. A hyperactive MC has invited the crew to his carnival which appears at first to resemble nothing much more than a board game. However, at the end of each turn, each player is faced with a nifty mini-game. These games utilise the Wii Remote's motion, pointing and button control in a variety of ways. This really is the perfect game to play against friends and family thanks to the multiplayer mode which allows you and your friends to team up against each other in both two versus two and one against all challenges. Willing players can watch a tutorial that shows them what to do with the remote so no-one feels left out. Mario Party 8 also includes four more minigame-infused kinds of special games, such as Tic-Tac Drop, where players earn the right to put the next mark on the board by winning a minigame.