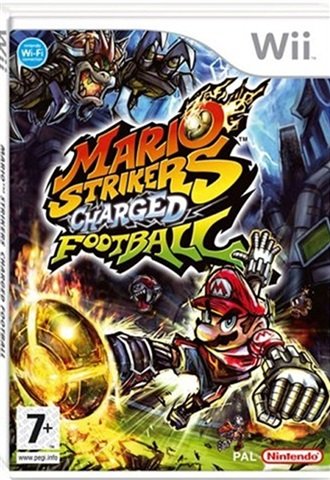 KEY INFORMATION Take to the pitch as Mario Strikers Charged (the follow up title to Mario Smash Football) returns with an all new roster of features, only for Wii. Use the skill the Wii Remote and Nunchuk Controller provide to win the ball, score unstoppable goals and take control of the goal keeper to perform spectacular saves Characters: Mario is joined by other famous Nintendo characters who take on the role of captain. Players then select a host of popular teammates to make up the rest of the team. How to progress through the game: Players form an original team by combining one of 12 captains with three of eight sidekicks before competing in one of the games many modes. Anything goes in Mario Strikers Charged as players are allowed to utilize a variety of special abilities to clinch important goals. Super abilities/power ups/moves/features: Each captain has their own set of skills, super abilities as well as the ability to perform special shots called Mega Strikes, where the iron ball splits up to five balls and flies at the goal. The defending player must use the Wii Remote to target and aim at and shoot these balls out of the air before they concede a goal. In this game players can also charge energy to the metal ball, making it more likely to find its target when fired at goal. Each of the stadiums in Mario Strikers Charged have various characteristics and contraptions, which influence game play. Players must learn to use this to their advantage to truly dominate the pitch. Multiplayer: Mario Strikers Charged will not only feature an action packed multiplayer mode but will also support the Nintendo WiFi connection service, allowing players to take part in tournaments with people from all around the world.