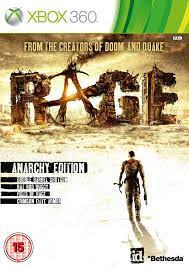 The Anarchy Edition was a free upgrade for anyone who pre-ordered Rage. This edition includes a slightly different package, and a variety of in-game unlocks: A copy of the game Fists of RAGE - an upgrade for the player's fists that kill weaker enemies in one hit Double-Barrel Shotgun - a handheld, sawed-off version stronger in close combat Rad Rod Buggy - a driveable vehicle with a Boar themed paintjob Crimson Elite Armor - very strong armor that increases defense and carrying capacity The Anarchy Edition also includes the downloadable Wasteland Sewers missions, also included with new copies of the standard edition. All of the exclusive items are DLC, and granted through a code included in the game package. Japanese retail release of the game did not contain the "Anarchy Edition" in its title, but included all the same downloadable content.