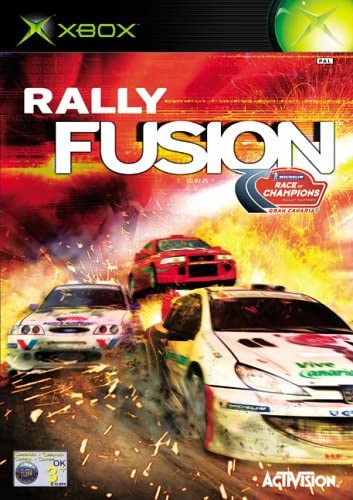 Stray amateur photographers scampering out of the way as you race toward them, the roar of the engine and the satisfyingly deep crackle of rubber on gravel. Huzzah! It's another rally game to go with all the other rally games on the shelves. Colin's already made his presence felt on the Xbox, but that game hasn't been the huge success that was expected. Maybe this is the rally title Microsoft's monster console has been waiting for. Actually, scratch that - this must be the rally title the Xbox has been waiting for. We like Rally Fusion, a lot. Based on the Michelin Race of Champions, which is held annually in the Canary Islands, the game lets players take on the top racers from the world of motorsport with the ultimate goal of becoming the Champion of Champions. Rally Fusion features nine different environments including authentic road, desert, mountain and arctic conditions for players to test their talent as they careen through hairpin turns on their way to the finish line. With detailed damage modelling and splendidly dirt-caked effects, Rally Fusion allows players to select from 19 of the top makes and models in the sport, including Lancia, Mitsubishi, Seat, Audi and Peugeot. Nine different modes, including Hill Climb, Elimination and Follow the Leader, as well as the rally modes you might expect, and 20 different tracks, from the mountains of the Andes to the sandy deserts, from a circuit set in the middle of the city, to an indoor stadium course, offer a diverse gameplay experience and near endless replayability. Rally Fusion: Race of Champions has some really nice touches. Some are immediately apparent, such as the weather effects and the detailed environments - the presentation of snowy/icy conditions is especially impressive - and then there are some that aren't so obvious. Your co-driver can lose his rag if you drive too recklessly, so much so that the makers have bleeped out some outbursts. Within a few minutes of beginning your Rally Fusion experience, you'll realise that this is a game that doesn't take itself as seriously as Colin 3 does, and it's all the better for it. Where Colin at times felt like a trudge up the hill, Rally Fusion puts you on the rollercoaster. Any fan of driving/racing titles can get a kick out of this game.