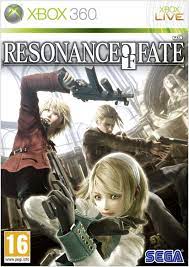 Resonance of Fate is a role-playing game that takes place in the future when the Earth becomes too poisonous to live on and humanity moves to the machine-city of Basel. It is a city built high up to the sky upon a tower-like structure. The story of the game focuses on Vashyron, who is the leader of the PMF (Private Military Firm), as well as two other characters named Zephyr and Leanne, who join Vashyon's group and take on missions from the citizens of Basel. Combat in Resonance of Fate is done through a unique turn-based system dubbed tri-Attack-Battle (t-A-B). Movement, charging, and attacks are done using the action gauge until a character's turn is over. However, enemies still attack in real time while the player is performing actions. Before attacking an enemy the player needs to build up their charge, which builds up fast if a character is closer to the enemy. Attacks in battle require at least one full charge to be successful and either deal non-permanent scratch damage with machine guns and rapid fire weapons or permanent direct damage with handguns and grenades. Dealing direct damage also makes scratch damage permanent. Once an attack is completed the character's turn is over, so it is up to the player to use their characters to deal both types of damage timely and effectively against enemies.