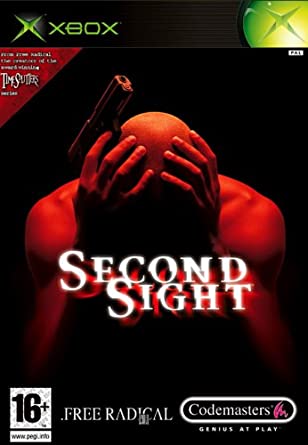 UK-based developer Free Radical Design is a company well known gaming connoisseurs. Formed by a group of former Rare employees responsible for working on the acclaimed Perfect Dark, Free Radical quickly rose to fame when it brought Timesplitters to a population of shooter-hungry gamers. Now an internationally respected developer, the company unleashes a very highly anticipated Second Sight to the world. Blessed with a refreshing and captivating plot, Second Sight pits players as protagonist John Vattic as he awakens from a coma in a US medical facility. His body and mind are broken, he doesn't know his name and he can't remember his past. However, he quickly discovers he has a set of psychic abilities acquired as a result of his suffering and experimentation, which he knows must be used to escape his prison and unravel the mystery surrounding him. Almost immediately after you escape your cell and begin wandering the sinister medical institute, you quickly discover an unsettled population of medical professionals, most of whom are bent on capturing you. Playing in a third-person perspective, you are free to have Vattic explore his surroundings as you see fit, but within minutes you'll have to put your psychic abilities to use. Unarmed, players must learn to use telekinesis to pick up and throw various items at the enemy with great force, rendering them unconscious in most cases. Given time, you'll learn that your powers can be used not just to move things, but to heal, make yourself invisible and even possess people. However, doing so depletes a valuable 'psychic meter' that only replenishes with time - it must be used wisely. And it's the how and why of these mysterious powers that drives the game forwards. To help keep players intrigued, Free Radical has also introduced a 'flashback' element to the proceedings that allows players to control Vattic in a past time to discover the truth about the failed experiment and even change current events for the better. Playing as Vattic in the past also has players ditching psychic abilities in favour of stealth gameplay, boosting the diversity of Second Sight even further. A lot of time and effort has clearly been spent on every aspect of Second Sight. The play mechanic is balanced, the controls are fluid, the plot is interesting and the graphical style of Second Sight's many locales matches the story and overall feel of the game brilliantly. This can only be a sign of great things to from Free Radical.