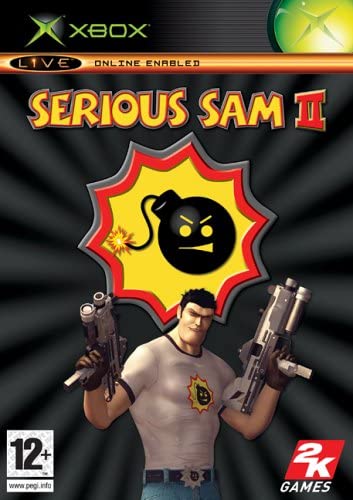 Serious Sam II is the sequel to Serious Sam is an equally un-serious first-person shooter with everything blown out of proportion. It offers huge levels with hundreds of opponents, funny worlds with various themes, a vivid colour palette, lots of big guns and some of the largest bosses around (including a giant gorilla, bee, skeleton, dragon and robot). Sam "Serious" Stone must fight through the minions of evil mastermind Mental to collect the five pieces of a medallion which will allow him to harm Mental himself. The game is based around DOOM's more simple approach to gameplay with a dose of old school game design featuring score, a life-count and extra lives. The outrageous enemies come in waves, dozens at a time, ammo for the basic weapons is plentiful and action almost never ceases. Sometimes a dinosaur, various vehicles (including a flying saucer) and static guns can be mounted to lay waste to Mentals hordes. Weapons include a revolver, shotgun, circular saw, plasma gun, sniper rifle, Uzi, rocket launcher grenade launcher, mini gun, canon and a serious bomb. The game's engine combines support for a high model count on screen at any given time with a long draw distance.