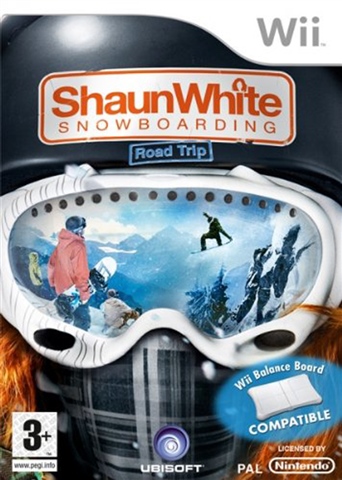 We can't all have a proper winter. Some of us are relegated to drab, grey skies and endless drizzle. In such conditions, the only way to slide down slopes at high speeds is to get down on your belly in the mud. Or.. get Shaun White Snowboarding! It's not quite the real thing, but it's as close as you're going to get without buying a plane ticket. With the Wii version of the game Ubisoft's tried to do something a bit different, giving it it's very own suffix to let you know - Road Trip. In keeping with the name, Shaun's going on a bit of a trip to some of the world's best mountains. Because he's a nice sort of chap, he's taking you along with him. Creating a separate Wii version was not an arbitrary decision, either. There's a crucial difference from other versions - the balance board! Using Nintendo's peripheral, players will be able to simulate the real thing, standing side-on to the TV and shifting their weight to change direction. Certain tricks can also be performed using the board, too, while others will require a bit of input from the Wii Remote. Players complete a number of challenges, ranging from tricks-focussed runs to straight-out speed runs to the bottom. You won't have to brave any double black diamonds alone, either. Up to four people can ride together either co-operatively or in competition with each other.