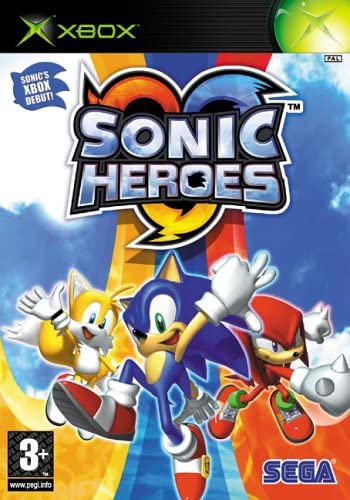 As far as video game history is concerned, Sonic the Hedgehog is a legend, and was a real coup for Sega in its 16-bit days. Sonic the Hedgehog 1 and 2 are generally regarded as the best two games in the series due to their frenetic gameplay and rollercoaster style levels. The blue super hero did lose his edge a little when he made the transition to 3D in Sonic Adventure, focusing less on speed courses and more on adventure and exploration. But now there's Sonic Heroes, an effort from Sega that takes Sonic back to his rollercoaster days on MegaDrive and that adds a brand new play mechanic at the same time. "A tough team for a tough job" is the phrase Sega has attached to its latest offering. It's an apt slogan for Sonic Heroes, and team play is what it's all about. Firstly, players are required to choose from one of four preset teams, each playing host to three familiar characters from the Sonic universe. Team Rose is designed for beginners, complete with tutorial, whilst Team Dark is suited to more accomplished games players. Team Sonic and Team Chaotix lie somewhere in between the two. Choosing a team is important, since it slightly effects the way in which Sonic Heroes is played in a single adventure. Each of the characters from each of the teams have their own unique abilities and objectives, but the game's compulsory character combinations means there's always a power player, a speed player and a light player. And as you might expect, there are certain obstacles throughout Sonic Heroes' dozen or so levels that make these abilities a requisite to progress. The clever part is the fact that you must toggle between your three characters to achieve your goals, and this is made easy through an intuitive control method. Some sections require the use of speed, whilst other have players smashing through brick walls. Mission objectives can very slightly, but gameplay is largely the same, regardless of which team you choose. Sega has struggled with Sonic over the past few years, but there is light at the end of the tunnel in Sonic Heroes. It's all good!