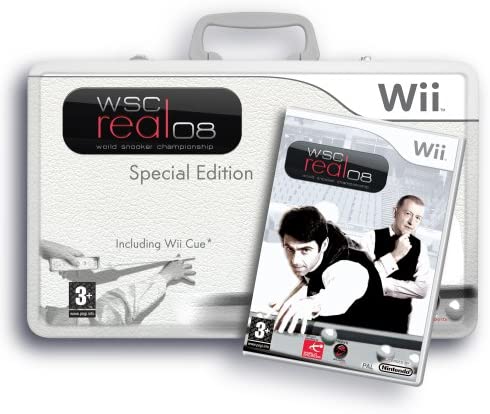 Everybody's favourite pub game is back for another quid down in World Snooker Championship Real 08. As the name suggests, this year's iteration faithfully recreates the professional snooker experience, with the chance to pot your luck against stars such as John Higgins and Graeme Dott in a range of official tournaments. Part of the excitement in this game comes from training your very own snooker superstar, with multiple options to customise your experience, including prize money, awards and sponsorship deals to decorate your dressing room. A personalised nickname system means that, as you play in your own unique style you'll be attached with one of many unique monikers. You can take this fearsome persona online and play truly realistic snooker with friends or via the UK 8-Ball Championship leaderboards to become king of the cue. The ability to see your opponent's personalised nickname will give you an idea as to their style of play. If you end up losing to 'The Rocket' too many times though, the advanced coaching system is on hand to get you back up to speed. There are various training missions to complete which will harden your skills, and your personal coach will give you pointers to brush up on weaker aspects of your game. In WSC Real 08, player stats are now affected by how successful your training is. The Nintendo Wii version emphasises the realistic nature of the game, by using the Wii Remote to line up your shots just like you would at the snooker table. To enhance the experience, the Wii Special Edition includes a cue stick peripheral and a metal case to carry around. With a broad range of match styles, including 9 Ball, Rotation, 3 Ball Pool and even Billiards, along with the voices of legendary commentators John Virgo, Steve Davis and John Parrot, World Snooker Championship Real 08 looks to be the definitive snooker simulation.