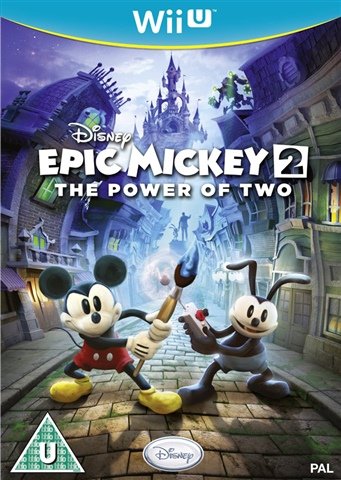 Mickey Mouse is known throughout the world as the iconic mascot of the Walt Disney Company. But in Epic Mickey 2: The Power of Two, he's not only crossing paths with original 'prodigal son' mascot, Oswald the Lucky Rabbit, he's sharing the spotlight with him! The pair return to the alternate dimension known as Wasteland - a world filled with 80 years of forgotten Disney characters and locations. The two characters have different ways of collaborating within the Wasteland. Mickey returns with his trusty magical paintbrush, which allows him to paint new structures into existence or spray thinner on surfaces to erase them from view. Depending on how you play, there's a consequence and environmental reaction that shapes the course of the game. Oswald doesn't rock a paintbrush, but instead wields a remote control that gives him the power to command electricity. As with Mickey, however Oswald decides to approach certain puzzles and situations will have consequences on the world around him, as well as his co-op partner. Both Mickey and Oswald will need to work together and react to one another's actions to complete the game. Disney Epic Mickey 2: The Power of Two will take the heroes across many different lands that resemble forgotten Disney universes. The game is seen as a musical, with many characters breaking into song at certain points to advance the plot. So if you fancy some inventive co-op action, along with a good singalong, then this will be a valuable trip down memory lane.