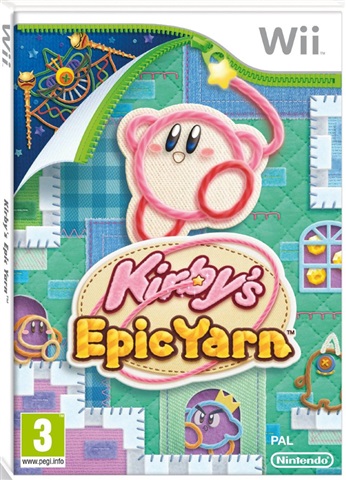 Pop quiz. What's cuter than Kirby? Nothing, that's what. Kirby is the greatest pink ball of.. something that the world has ever known, and his platforming adventures have been sheer unadulterated 'D'awww'-fests. In Kirby's Epic Yarn - his first console platformer since the Nintendo 64 days - our favourite circular hero abandons the pink filling in favour of a string diet. His body and the world around him are made out of fabric, and that opens up a whole new thread of possibilities. You can use your body as a lasso to catch onto zips and pull them open to reveal hidden areas and new ways to progress through the level. Going behind the scenery will result in Kirby bulging through the material as you explore secret passages. It's not just the scenery you'll be transforming either - Kirby himself can change into cars, dolphins, UFOs and even gigantic battle tanks. Each form has specific benefits that can help Kirby get across certain dangers - zoom past obstacles as a car, glide through water streams as a submarine, and punch things into oblivion as the tank. In true Nintendo fashion, two players can play together in a fun co-op mode that sees two different yarn-based Kirby characters work as a team - or try to unravel each other - to reach the stage goal.