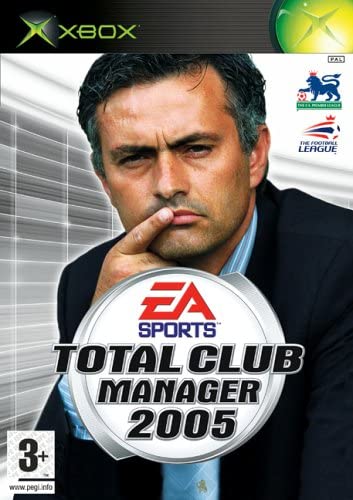 Jose Mourinho gazes thoughtfully from the cover of Total Club Manager (TCM) for the 2005 edition: he's the hot new thing in real life football management, ousting the appealing if unspectacular Martin O'Neill from front cover duties. Mourinho's probably wondering why you should fork out for another version of TCM, and you're likely to be thinking along the same lines. Well.. TCM2005 is the football management sim that boasts more officially licensed leagues, teams and players than any other console management game. That's a good reason to blow the dust off your wallet, but it doesn't end there. TCM2005 also uses the latest FIFA Football game engine so you can watch your matches in 3D and influence the outcome from the dugout with the manager commands feature. Football Fusion also makes a welcome return, giving you the option to take your team of superstars/no-hopers and anything in between out onto the pitch and play in FIFA Football 2005. You can choose to manage or play your team for any fixture, giving you total control over your players both on and off the field. In addition to the 20+ official leagues and teams therein, TCM2005 includes over 40,000 towns and cities from England, Scotland, Germany, Switzerland and Austria, so you can create a team from your hometown, or beyond. Design your own club badge, kit and stadium and take on the biggest names in Europe. Or the likes of Aarau and Lahti. TCM2005 has a massive database of players, and as well as their on-the-field skills, each player has an expanded range of character traits, including leadership, temperament and the will to win. With a wealth of tactical options available to the wannabe manager, players are ultra-responsive to every tweak and change, no matter how subtle, and react to your every instruction. Managers can create dozens of different formations with the tactics editor and save them for future use. You can control your team from the touchline by studying vital match information without interrupting the game. TCM2005 lets you adjust tactics with the press of a button, and there is a huge range of player calls to make to influence the outcome of the games you manage in. Throughout the individual matches - as well as through the whole season - you can monitor player fitness, ratings and territorial possession, all without pausing the game. We're duty bound to let you know that playing Total Club Manager 2005 will swallow up a large part of your life if you let it. Don't say we didn't warn you.