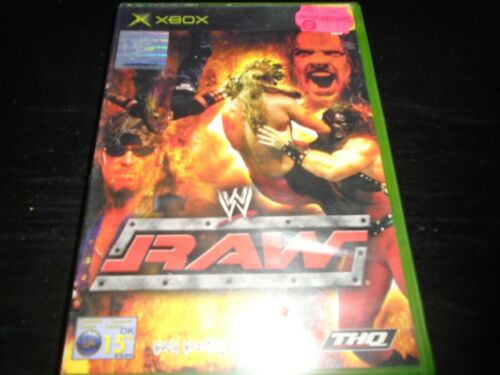 Fancy feeling the pain, intensity and glory of the World Wrestling Entertainment in excruciating detail? Well, now you can with the release of WWE Raw for Xbox. Waging war with modern day gladiators, players battle to the top of the WWE ranks in what claims to be the ultimate battle of supremacy. Alliances can be created with other WWE Superstars or havoc can be wreaked on the entire Federation. There's more than one way to secure the World Wrestling Entertainment Heavyweight Championship. Playing as one of over 35 WWE superstars, players can choose from a variety of different match types, such as Exhibition, Title Match and King of the Ring. Each match type has a large number of sub-selections, resulting in quite an amount of match options. Up to four players can take part in the action in anything from single match, Tag Team, Tornado, to Fatal 4-way and Battle Royal. As is the norm with wrestling games, an editor is included for the customisation of characters, so all in all, there's hours of varied gameplay in this game. For the first time ever, the action can be taken into the crowd, with the audience scattering as the action heads their way. Also, opponents can be attacked on their way to the ring, so the fight can sometimes kick off even before they both arrive. With the addition of TV-style presentation with in-game cutaways and 'Double Feature' replay, WWE Raw has definitely made a real effort to go for authenticity.