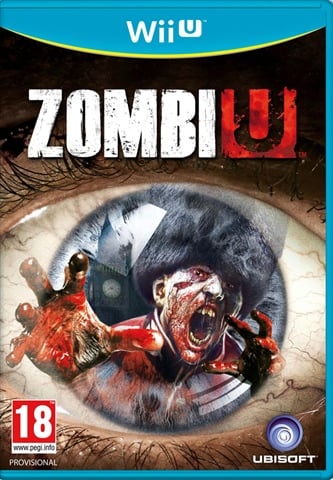 Wii U first-person thriller, ZombiU, is arguably one of the most interesting games from the first wave of games for Nintendo's second white box, the Wii U. The concept is pretty fresh for a zombie game: in a post-apocalyptic London, you play as one of a number of survivors, who must gather vital equipment necessary to properly defend the human race against the flesh-munching threat. As it happens, a secret society has been squirreling away such equipment over the last couple of years in preparation for the outbreak. The Wii U GamePad tablet screen acts as a map to track your progress, complete with fog of war so that you can't totally prepare for the scare round that next corner. The touchpad is also used to organise inventory in your current survivor's rucksack, and to quickly switch between items and weapons by using hotkeys. Hold down the Left Trigger on the GamePad, and your character will look at his or her tablet device. The Wii U touchscreen changes into a scanner, which you can then hold up and move around to take advantage of some cool augmented reality scanning. Scanning everything - from corpses to chests - is important to discover ammunition and extra items. Don't expect the game to go easy on you. Each character is equipped with one injection of virucide, which will keep zombies from biting you if they manage to grab you. And virucide, as you can imagine, is extremely scarce in the game world. Get grabbed by a shuffling undead and you'll get a chance to plunge a needle into its neck and completely destroy it. Run out of these last-resort rescue injections, and you're pretty much dead. It only takes one bite before your character is turned to a fellow zombie - and instead of starting back at a checkpoint, you respawn as a brand new human survivor and must play through the entire level from the beginning. The cool thing is, in a feature akin to Dark Souls, your equipment is lost at the point in which you died - but instead of laying in one point, they stay with the recently-turned survivor you last played. Kill them, and you get all your loot back. But, with short supply of items and only three weapons to choose from - a cricket bat, a low-ammo pistol and a slow-reloading crossbow - it won't take long before you're killed several times over if you're not fast. Zombi U is decidedly one for the hardcore. If they dare tackle it.